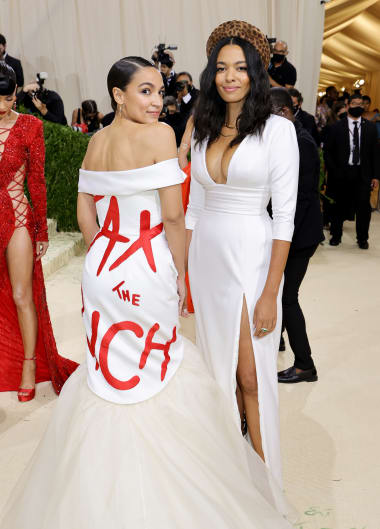 Canadians at The Met Gala 2021

The fabulous Met Gala took place this past Monday, and it was so exciting to see so many Canadians represented on the carpet! The glamorous ball is an invite-only event, with the star-studded list chosen by Vogue Editor-In-Chief, Anna Wintour. Attendees are expected to wear the most glamorous looks, and most of them create moments in fashion that will be remembered forever. Although the theme on the night was “In America: A Lexicon of Fashion”, Canada was still able to show their northern pride with some gorgeous looks.

Here’s a rundown of some Canadians who made some bold statements!

U.S. congresswoman, Alexandria Ocasio-Cortez (known as AOC), wore a dress designed by a Toronto fashion designer! The white dress made headlines for its text on the back that read, “Tax The Rich” in big red letters. Aurora James of Brother Vellies was the mastermind behind this statement piece. What an amazing moment!

Actor Dan Levy also made quite the powerful statement with his outfit. The ensemble by LOEWE was created by LGTBQ activist David Wojnarowicz. He envisioned this look as a way to create visibility for queer people and celebrating inclusivity. What a great look!

Mississauga born model, Winnie Harlow, showed up to the red carpet booking as stunning as ever! She was wearing an Iris VanHerpen bodysuit with a beautiful flowy train. The way she posed is just confirmation of what an amazing model she is. Absolutely stunning!

Justin Bieber made an appearance with his wife, model Hailey Baldwin. Justin wore a cool-cut jacket and wide-legged pants by Drew House, while Hailey wore a gorgeous black dress by Anthony Vaccarello for Yves Saint Laurent. What a beautiful couple!

Simu Liu who plays the new Marvel hero, Shang-Chi, made his Met Gala debut this year. He showed up in a snazzy white Fendi suit and he was looking sharp. The Torontonian made us all super proud!

Shawn Mendes showed up with a rockstar look and attitude! The Canadian musician wore a black Micahel Kors leather blazer. He accessorized with a dice necklace, two belts, and a guitar wire around his neck. Talk about confidence!

I’m so excited to see such a Canadian presence. I’m looking forward to next year’s event already!